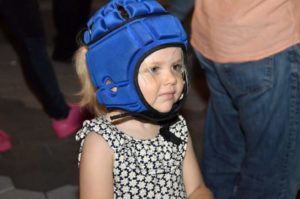 Hi everybody – It’s been two months since we last updated you on Sally, she had just finished her first day of school and we were adjusting Sally’s meds after seeing a lot of seizure activity. For about a month we saw a stabilization of Sally’s seizures after increasing her Onfi dose.

However a few weeks ago we started to see an increase in both the frequency and intensity of Sally’s seizures. After speaking to other parents with children experiencing post cancer treatment seizures, and doing a lot of research, we decided to start Sally on Charlotte’s Web, a cannabidiol (CBD). It’s legal in all 50 states and contains virtually no THC, so there is no “high” associated with it.

We’ve known a lot of parents who’ve had success with CBD, so felt it was the next best option. Sally has been on an increasing dose of the oil for several weeks along with the Onfi, however in that time we have continued to see her seizure activity worsen even more. Sally will either stare off into space or become disoriented for several minutes at a time. Her head will usually jerk every few seconds, a myoclonic jerk seizure, but recently her arms (and sometimes legs) will jerk up as well. We have not seen that behavior since this started months ago. One day Nicole counted 38 jerks, and stopped counting because it was too hard to. This is the most intensity we’ve seen since before summer and are often seeing the activity occur almost every hour. This is a video of Sally during one of these periods, she’s disoriented, spaces out and is unable to hold a thought. Click here to view.

We really hoped cannabis would be the solution, but does not appear to be. We decided it was time to reach out to Dr. Devinsky’s team to discuss next steps, assuming they would tell us to switch Sally to the Ketogenic diet, an earlier recommendation of his. We were surprised to learn that they instead wanted us to start a new drug, Depakote. Their reasoning was that the diet would take several months to have an impact, and we needed to stop Sally’s downward trajectory NOW. We started Sally on a third drug (Onfi, CBD, Depakote) this weekend, and are keeping a close eye on her to see if it has any effect.

This increase in activity has us extremely concerned, especially as we start to eliminate potential solutions. We honestly don’t know where this is going. Sally has some understanding that it’s happening, she’ll often come up to us and ask to be held when her activity is starting. Sometimes she’ll even say “having seizure”, which is heartbreaking to hear. The boys have become good at recognizing her activity, and are quick to alert us.

We are trying to continue on with life and keep Sally busy. We signed her up for a dance class, it took a few weeks but a very patient and understanding teacher finally got her to start participating and she loves it. She asked to “Go dance with Ms. Tabitha” when she woke up yesterday, and again later in the day, and asks us daily to dance the Whip and Nae Nae with her. 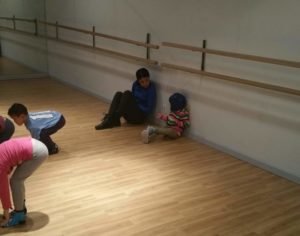 Ms. Tabitha at Beyond Dance has been very understanding of Sally’s situation and patient with her. 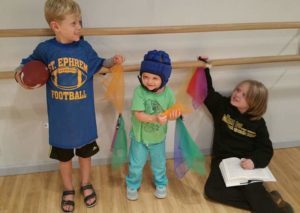 Sally demands her brothers join her in class when they’re with us, how can they say no to their little sister?

School has been a bigger challenge for Sally, who is two years behind the other kids in their development due to the isolation and effects of cancer treatment. We are in the process of moving her into a smaller class of 12 kids where she can get more attention and hopefully be less overwhelmed. We’ve had to begin the process of deciding what to do with her next year. As of now, we are not comfortable with sending Sally to Kindergarten, although she is strong in some skills, she is clearly way behind in others. We’re exploring holding her back a year, or switching her to a private school with additional services. Both options are on the table, and both will require a long and arduous process over the next several months. 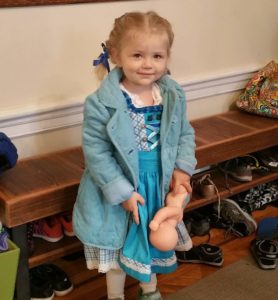 “A blue dress” – When asked what Sally wanted to dress up as for Halloween. OK then.

We’re taking everything in stride. Every night Nicole thanks God that Sally is still in remission, but asks if he can please stop the seizures. That sums it up, we know we are lucky to still have Sally with us, but that cost keeps revealing itself in increasing amounts. Every option is on the table.

Anybody who has followed Sally knows Christmas has always been our favorite distraction, and will be again this year. She helped us decorate the tree yesterday.

Please keep Sally in your thoughts and prayers, she could really use them.