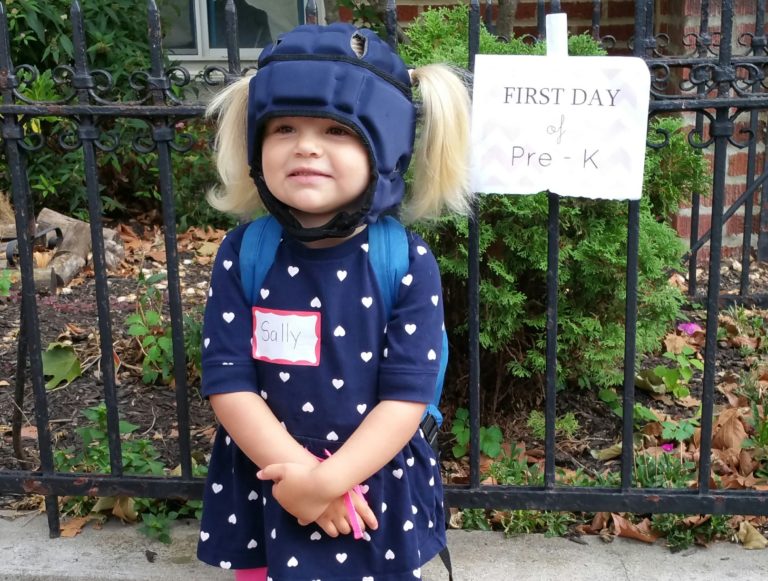 Waiting for the bus on her first day of school.

Hi all – Well, that summer went by rather quickly, right? It was mostly an enjoyable one for us, with some challenges included. As the title indicates, our little girl started school today. There were times during treatment that we wondered if this day would come. Well, it did arrive and Sally has achieved another milestone. She will attend William O’Connor Midwood right here in Brooklyn, we’ll be putting her on a bus every morning. So far she’s been excited about it, we hope that lasts.

It was very emotional morning for us – happy that our girl achieved this milestone. Scared, as she’s never really been away from us on her own like this. Proud that she’s worked so hard to get to this point. Guilty and sad that we know too many kids with cancer that aren’t with us and didn’t get to achieve this milestone. All of the emotions swelled up inside of me and I broke down crying as the bus took our little girl away, I couldn’t help but think of everything we’ve been through to get her here, and all the parents we know who wouldn’t get to experience this moment due to childhood cancer. 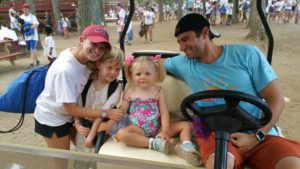 Sally at camp with her 1:1 counselor Zoe.

With this milestone of going to school comes anxiety. Sally has never been out of our care for more than a few hours at a time. We began that adjustment this summer at Sunrise Day Camp, the summer camp that the boys have attended which is dedicated to childhood cancer families. Sally was finally able to attend, where Nicole would drop her off for a few hours at a time twice a week, doing thankfully well with her 1 to 1 camp counselor Zoe pictured above. Most concerning for us is that Sally will now receive all of her therapy at the school, where we won’t be able to observe her progress or regress. Sally has always received treatment under our close eye either at home, in the hospital or at the local playground. This allowed us to keep close tabs on her development, especially with her rigorous feeding therapy as we’ve been trying to slowly transition her off the feeding tube. We’re hoping that we don’t see any regression in her development, and will work to keep an open dialogue with the school.

Also concerning is the seizure activity, and how the school will handle it. When we last wrote, Sally had just had her first appointment with Dr. Devinsky and were working on getting her medications right which included Keppra and Onfi. We continued to see some very aggressive behavior from Sally which was attributed to the Keppra. In our follow up appointment with Devinsky, we decided that we would wean Sally off of that med to hopefully improve her behavior. After removing the Keppra we saw improvement in her cognition and processing. Thankfully things like labeling colors and counting came back. We also learned that we had the option of doing a home EEG, much preferred to the controlled environment of performing it in the hospital. For instance, we would see one seizure in the hospital and eight at home. We scheduled the test for August, and in the meantime began slowly phasing Sally off of the Keppra. As hoped, her mood definitely improved and for awhile we did see some improvement in the seizure activity. 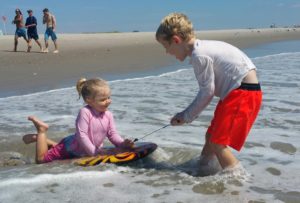 In mid-August, Sally underwent the home EEG. These tests to date have all been in the hospital, where she’s been in a controlled environment, unlike the actual life she lives. At home, we try to eliminate as many of the things we think are triggers as possible. Those include ceiling fans, sunlight, and reflective surfaces. We know that while at school she would be exposed to these triggers so decided to remove those restrictions over the weekend and run her hard knowing that’s what she’d be expected of at school. We brought her into NYU on a Friday morning to get hooked up with the standard headgear, however she was provided with a backpack that included the machine. Let’s just say, our little girl LOVED the backpack and had no problem lugging it around. 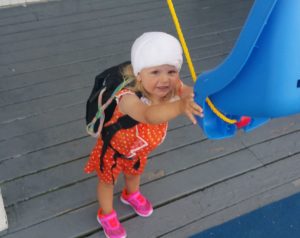 Doing her EEG, she loved her backpack, we knew wearing one to school would be no problem for her.

The weekend was warm and humid (another trigger), we weren’t able to bring her to the pool but she was able to run around the sand to her heart’s content. Every time we saw something that resembled seizure activity, we had to hit a button on the machine and keep a log of what we saw. This required us to watch her face continuously, and sure enough we saw a lot of activity and pressed the button several times. By Monday we felt like the machine should have gotten plenty of data, having seen more seizures than we’ve seen to date. We had concerns that the machine would malfunction being that Sally was likely sweating under the headgear, but kept our fingers crossed. 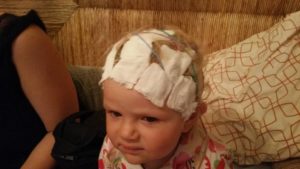 Removing the EEG after the weekend.

We unhooked her on Monday morning and dropped the unit off, knowing we likely wouldn’t get the results back for at least a week. After a stressful weekend of closely monitoring her, we all headed for the cabana where we were invited to say the Pledge of Allegiance at the annual bocce ball tournament fundraiser. The event supported our family last year, so we were delighted to help out, with Thomas doing the honors.  It was a much needed low-key day for us, and of course the weather was much cooler than over the weekend when poor Sally had all that gear on. 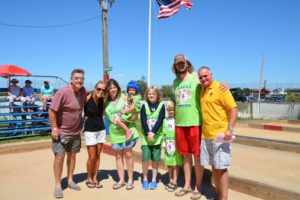 Saying the Pledge with our friends at Breezy Point Surf Club.

When we finally received the results it turned out all of the times we hit the button were confirmed as seizure activity. On the one hand, we were relieved the machine captured the data that we can act on, on the other hand it was disheartening to see Sally had the most recorded seizure activity to date. As a result, we’re in the process of increasing her Onfi dosage, however after the first few days we are seeing more activity including stronger myoclonic jerks and spells where she’s not attentive. We don’t know if this is her adjusting to the new dosage, or that the meds are potentially making the seizures worse. We have our follow-up appointment with Dr. Devinsky this month.

Here is a link to seizure activity that we saw in Sally just this week, you can see the myoclonic jerks and the absence: view here.

We have to admit that the seizure activity continues to worry us. We have a very small community of families that have children battling post cancer treatment seizures, in most cases the medications only work temporarily and is not something they grow out of as with many other childhood forms of epilepsy. We also know from the other families that getting the seizures under control as early as possible is vital. Nicole, Sally and I all had blood taken for genetic testing to see if there is any form of epilepsy in our genes. Those results will come by the end of November, and will provide us with more data. 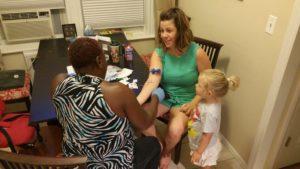 Getting blood drawn, aka “getting pokes” as Sally calls it, for genetic testing.

We’re happy to say that we believe Sally had a good first day at school, she came home exhausted but cheery. We’re told she removed her helmet both on the bus and in the school, likely testing the staff and showing her assertiveness, our Sassy Sally.

The next few weeks are important ones. We need to monitor Sally closely to make sure she is continuing to show progress in her development. With the increase in seizure activity, we have to make some important decisions on how to treat it, knowing we have to stay ahead of it. We’re planning on heading to the CureFest childhood cancer awareness march this month to let Washington DC know that our kids deserve better and safer treatment options. There are too many kids we’ve known who should have been celebrating their start to school this year. We encourage everybody to Go Gold this month, whether a gold ribbon on your door or changing your Facebook profile, every bit of awareness generated helps.