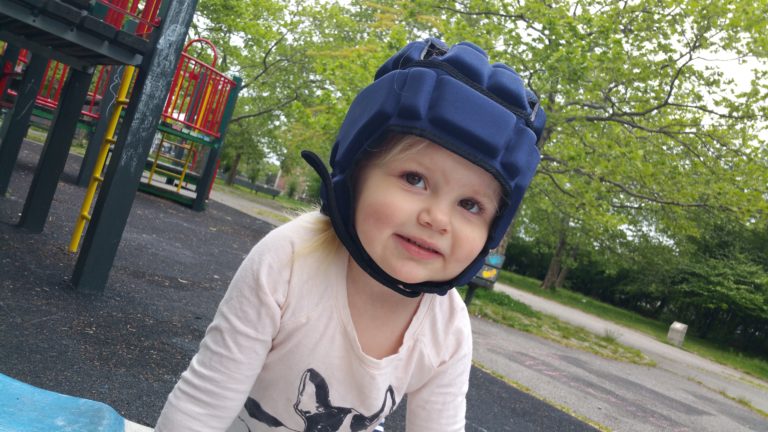 Sally has been wearing a helmet outdoors as a precaution due to the seizure activity and the drug side effects.

Hi all – When we last wrote about five weeks ago, Sally had just gotten home from NYPH-Weill Cornell Hospital where she had undergone an EEG which confirmed that she was experiencing myoclonic seizures. We had said that our first step was to select a specialist that would be on the same level as Dr. Steinherz, somebody regarded as one of the best in their field and experience treating kids suffering seizures post cancer treatment. We spoke to therapists, friends and even crowd-sourced on Sally’s Facebook page. One name consistently came up – Dr. Orrin Devinsky at NYU-Langone Medical Center in midtown Manhattan. Not only is Dr. Devinsky highly regarded, but he has extensively treated children battling seizures both on and post cancer treatment. We learned that he had a two month wait for an appointment, but luckily a friend at the hospital helped us secure an earlier appointment knowing the urgency of Sally’s situation.

A few weeks later we sat with Dr. Devinsky for our initial meeting, and instantly took to him. More importantly, Sally did too. We reviewed Sally’s medical history (which obviously took some time) and her recent brain MRI. Upon seeing her MRI he felt strongly that there was a connection between the damage to Sally’s white brain matter (from the intrathecal chemo) and the recent seizures, mentioning that he’s seen 40 other kids with ALL Leukemia with post treatment seizures. That number was eye opening to us as we weren’t sure if there was any potential for a connection. It also convinced us that Dr . Devinsky was the right doctor for Sally as he acknowledges that treating chemo induced seizures will differ from seizures caused by other reasons. 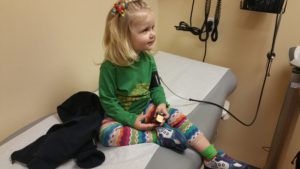 Unfortunately NYU couldn’t open Sally’s EEG from Cornell, so Dr. Devinsky was unable to prescribe any next steps. He did have us alter the medicines that Cornell had recommended which included upping the Keppra that Sally has been on for over a year, and holding steady the increasing dose of Onfi that Cornell had prescribed. Other than that, his hands were tied until Cornell would release their findings from Sally’s EEG. They did say it would be a good idea for her to wear protective headgear when out and about due to falls from both the seizure activity and the drugs. Here’s a short video from earlier showing her off balance and falling: Click to View 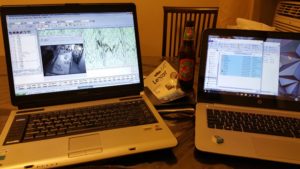 It took a 10 year old laptop, a new laptop, a cd-rom burner, a flash drive and a lot of patience (and some beers) to open Sally’s EEG from Cornell so that we could hand it over to NYU.

Over the next few weeks we saw some changes in Sally, both good and bad. As we mentioned in the last update, Sally’s appetite increased and she was finally eating well, a major boon for us. However, she was having trouble sleeping. After having blood work done at NYU, it was determined that Sally should up her Keppra dose. With that, we began to see an aggressiveness in our typical Sweet Sally, displaying a quick temper and often hitting. Throughout all of this, we saw fewer “jerks”, but an increase in blinking and changes in her state. While eating, she would begin blinking, and then lay back in her seat and refuse to eat. After a few moments, she would sit up and begin to eat and act normal again. At first we thought it was typical toddler stuff, but then one of Sally’s therapists pointed out that after not seeing any of the symptoms, she’s been seeing an increasing amount in recent sessions. During her latest session, Sally was withdrawn for half of the time leaving the therapist very concerned.

When her therapists become concerned, we become concerned. We finally received Cornell’s report and it read that Sally’s EEG showed: “epileptic myoclonus, epileptic status epilepticus in sleep and in correct clinical context is consistent with Lennox-Gastaut (Syndrome).” The mention of Lennox-Gastaut (LGS) had us extremely concerned as it can lead to severe regression as we’ve seen with cancer survivors. We shared the results and our concerns with Dr. Devinsky’s team, who shared our concern and worked to get Sally in for a follow-up EEG starting on Friday night. 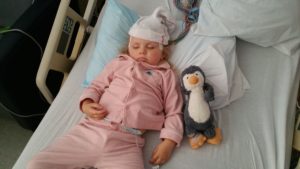 Throughout the test Sally was wired and tethered at all times to a unit on the wall. Luckily NYU has a playroom and we were able to detach and reattach between there and our bed area, however you had to hold the line the whole time and follow her everywhere to make sure she didn’t pull them out. It evoked memories of making sure Sally’s IV wouldn’t catch anything at MSK.  The first day was difficult, Sally was very aggressive with Nicole after increasing her Keppra dose again, striking her several times. Matt and William were with her Sunday, she was far less aggressive but very active. 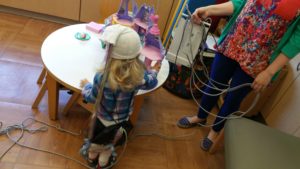 This was the unit she was tethered to, we had to connect it to the wall wherever we went.

Over the weekend we learned that Sally’s EEG is very active. A typical person with seizures will have a handful of spikes on their EEG during a typical day, whereas Sally has them almost constantly. Of those spikes, only one a day translated into a full seizure, however the activity is concerning to us and the doctors.  We’re still trying to figure out what the periods of blinking are, one theory is that these are seizure auras, pre-seizure static in the brain that can lead to a seizure. Those who experience them express various senses that indicate a seizure is coming and allows them to prepare for it. Although Sally gets these several times a day, they’re currently only materializing into a full seizure once a day on the current meds.

There are several drug and treatment options, each with their own side effects and impact on the body. Sally has her own unique medical background to consider. For over half her life she has received cancer treatment that has caused bone damage, toxicity to her organs as well as brain damage. This weighs heavily on us when deciding how to treat her seizures, we ask that you please respect our decisions. These are the current treatment options we discussed with the team:

All of these options have documented side effects except for cannabis which is currently being studied and is showing promise. One of the reasons we chose Dr. Devinsky is he is doing clinical trials at NYU with a strand of cannabis.

We’ve decided that as a first step we would increase the Onfi med to see what effect it has, especially since the increase in Keppra has led to too much aggression in her. Keppra and Onfi are the initial drugs that usually have the most success, so we want to start there before introducing any new options. As of now, it has improved her EEG and today was the first morning she did not have a seizure while at NYU. Based on these initial results, we agreed that we could discharge Sally and monitor her at home over the coming weeks. 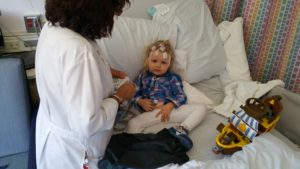 She was so well behaved while having the wires removed, the technician was amused.

From there we just have to take it a day at a time. We’ve learned from other parents with kids who are having seizures post ALL Leukemia treatment that our kids have a different progression with seizure activity. Some go through periods where the seizures stop but then return, and most exhaust all of the medication options eventually. We’re fully realizing that this is likely going to be a long process with Sally, where we will constantly have to alter her doses and drugs. All options are on the table, however we also know that time is of the essence, it’s extremely important that we get this under control as soon as possible before any regression can take place.

Knowing that her initial EEG at Cornell indicated a Lennox-Gastaut pattern (there are other criteria for this diagnosis), the potential for this to go down that path is worrisome and will keep us vigilant. Three years ago this week we were beginning our journey at Sloan Kettering. We were sent home thinking we had dodged the Leukemia bullet, only to have it resurface for good a few weeks later. Those memories are still raw for us. Although we may have the seizures under control today, we know that can change in an instant.

We’re scheduled to follow up with Dr. Devinsky in four weeks assuming Sally’s condition is stable, he may want to do a follow up EEG as a status check as it’s impossible for us to watch her 24/7 for any potential seizure activity. In the meantime, the boys finish up many of their activities this weekend so are looking forward to finally trying to get out to the cabana and enjoy the summer together. 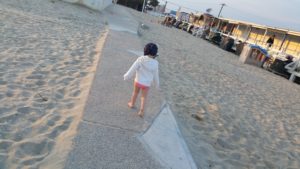 Please keep Sally in your thoughts and prayers, thank you for your continued support.