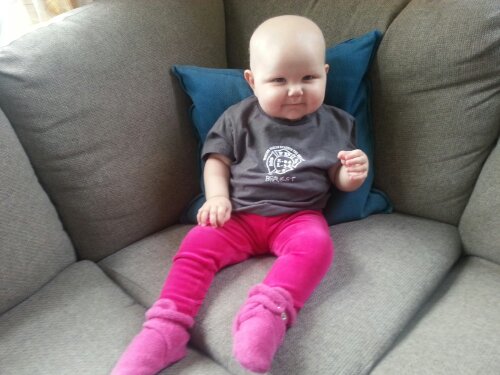 Sally in her new FDNY shirt, who made a generous contribution to her. 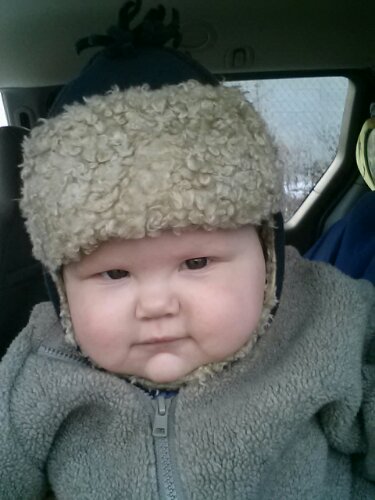 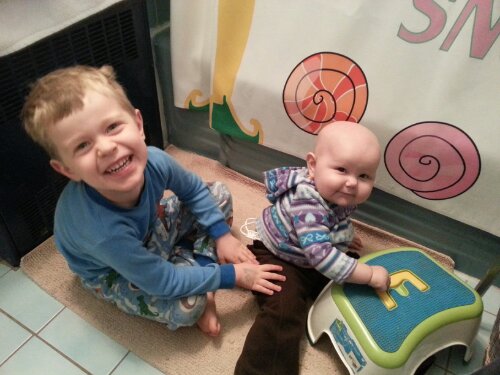 Being Silly with William. 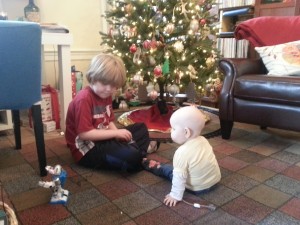 Playing with Thomas’ robot by the tree.

Hi all – we had a good day today, much needed after a string of weeks with challenges. First off, Thomas is back to his old self after having the flu. As last week progressed, he improved each day and finally returned to school on Friday. We had a scare last night when William woke up with a fever. We prepared for the worst but was back to normal this morning, a bullet dodged.

Sally is also doing great today, all she had was PT and a check of her counts at MSK. She does have an ear infection developing and some nausea from the Tamiflu, but is in VERY high spirits. Seriously, she’s been the Energizer Bunny being very playful and scooting on her butt all over the floor.This after last week when her counts dropped and needed an unplanned midweek blood transfusion. Even now she’s on the floor next to me smiling and playing, although she’s forgotten her bed time as of late.

Last week one of our Leukemia doctors, Dr. Kobos, asked Nicole, “So what is this I hear about you guys coming in on Christmas?” We often forget that many at MSK follow this blog, so word must have reached the team about our disappointment on having to spend Christmas Day at the hospital. They are working to potentially have us bring Sally in on Sunday so she can get her first day of chemo then, which would have her there Monday and Tuesday, Christmas Eve, instead. This would mean we wouldn’t have to come in Christmas Day. Obviously as we’ve learned with Infant Leukemia things can change. If it works out, great, if not we’ve already accepted that we’ll be there on Christmas and have already decided to make the best of it. While at the hospital one of us will take the boys to see some of the sights in the city, like the Rockefeller Tree, the train exhibit at Grand Central, and Nicole wants to finally show William the dinosaurs at the American History Museum. Again, make the best of it. 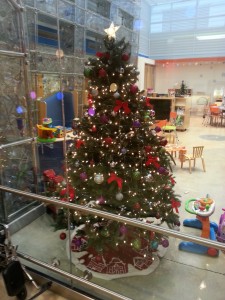 Christmas Tree on the Pediatric Floor that we’ll be spending plenty of time gathered round next week.

The other piece of good (great, amazing) news is Cami, after going through a marrow transplant, was cleared today to resume her normal life. She has lived in isolation since Sally was diagnosed which has been difficult on her and her family. The King family can get back to “normal”, and restart their life journey. Her mom wrote about it today, which brought joyful tears to Nicole and I. We couldn’t be happier for them to get back to worrying about the small things.

We also know that Sally still has a long and grueling fight ahead of her. Today we read a study recently released that says treatment for Infant Leukemia is starting to improve and better days lie ahead. However, the study starts out with the current stats of high relapse and failure rates for Sally’s ALL with MLL diagnosis, of which there are only 90 cases a year diagnosed in the United States. Children diagnosed after the age of one year have a 85% 4-year event free survival rate. Those diagnosed under a year like Sally was – 47%. Less than half. A sobering reminder that there are no guarantees in what we’re facing with her, even if we get her through the two plus years of chemo.

Again, its usually in the good (and brief) periods of treatment that the scary stuff creeps into our minds. We can’t ignore it, but can’t dwell on it either, it’s a healthy way to let go of some of the pressure that builds up in us as we go through this. Nicole and I both had a day thinking about it, now we shrug it off and continue the fight as always and look forward to Christmas. We’re really looking forward to next week and spending it together as a family, whether it happens to be home or at the hospital. Honestly, nothing matters as long as we’re together. We need to make these times together count, its more important than ever. Please keep Sally in your thoughts and prayers, as well as her buddy GiGi who is having a rough time with fevers at MSK.