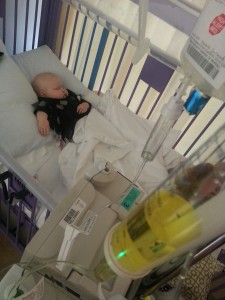 Catching some zzz’s during chemo. 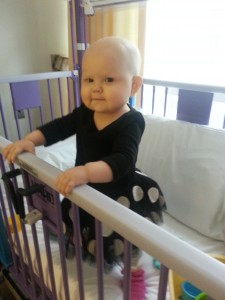 There’s a dancer in the house!

Hi all – I’m writing this on the subway so please forgive typos. On Sunday night Nicole mentioned that Thomas had a 103 temperature, and that we had him wearing a mask all day. Yesterday morning Nicole took Sally into Sloan-Kettering and I took Thomas, still with fever, into his doctor whom we had only recently switched to and had yet to meet. We both wore masks to be on the safe side. 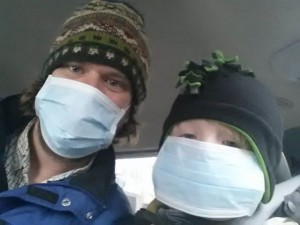 Thomas and I wore masks for our visit to the MD office to be safe.

I informed the doctor of Sally’s condition so he decided to do tests to be safe. A few minutes later he told us Thomas had the flu. My mind instantly went racing back in time trying to draw the lines of contact everybody had with him and how much exposure Sally had. She, Nicole and I all had the flu shot, the boys hadn’t yet. I tried to take them to a pharmacy on Black Friday but didn’t know that only a pediatrician can give one to a minor as they’d never had it before. Last week Sally’s struggle with mucositis pushed it down the list. So obviously I was beating myself up for not getting it done and allowing flu into our home. The flu can be very dangerous for kids with Leukemia, especially when their counts are low like Sally’s likely will be later this week as yesterday’s chemo kicks in.

The doctor told me to let MSK know right away. I couldn’t reach Nicole so called the front desk. Luckily everybody knows Sally (aka Beyonce) in the clinic so they were able to get the message to her doctors. Before leaving, the doctor said to bring William for the flu shot that afternoon. 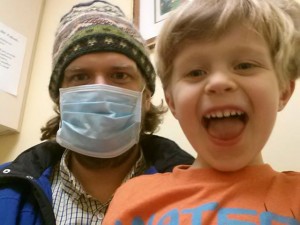 William did an amazing job, he wore a mask in the doctor’s office, only removing it for the exam, and barely winced when he got the shot. He skipped to and from the appointment, Mommy and I were very proud.

Our friend Andrea came over and hung out with Thomas so I could go to work for awhile. My bosses did an amazing act by giving me Christmas week off to spend with the family and make things easier on us, so taking more time off prior wouldn’t sit well with us. Nicole and I traded texts as we weren’t sure if we should send Thomas to stay with somebody, but having guilt about that option. Our team decided to put Sally on Tamiflu to be safe and since Thomas was on it as well we should be OK with both being home. We would just have to keep them in separate rooms and take extra precautions when going back and forth between kids. Thomas has been a trooper, wearing his mask and staying on the couch. Nicole is home with both of them today, Sally has her new ‘safe room’ to stay in and Thomas will stay on the other side of the apartment separated by a thick swinging wooden door.

Meanwhile, Sally had a long day at MSK. They got a late start with chemo as the central line in her back was clogged. It took awhile but were eventually able to get it unclogged and start treatment. The chemo she received is what typically gives her mucositis, so Nicole gave her these long sticks with wet sponges on the ends to suck on to keep her mouth moist. This chemo last cycle also dropped her counts, so the team reduced it a tad to give her body some time to recover after what she’s been through the last two weeks. They’ll start increasing the dosage next time as planned. 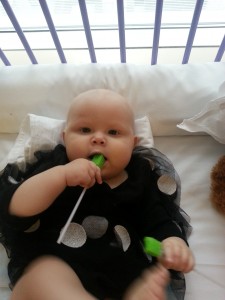 Chewing on the wet sponges keeps her mouth moist which helps with mucositis.

Nicole says Sally was in good spirits, she was in a ballerina outfit that she picked out just to make Scarlett happy. We have video of her dancing that we’ll try to upload and share. 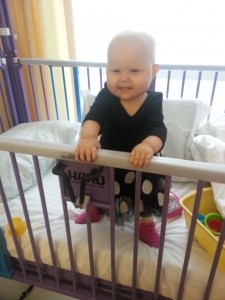 Sally’s hemoglobin was a touch low, so will have to keep an eye on her coloring and mood in case she needs a red blood transfusion. Otherwise, we aren’t expecting to head back into MSK this week. Our week will be focusing on getting Thomas through the flu and making sure none of us contracts it. Never a dull moment in the Kabel home nowadays.