Hi all – Sally has had a good week since we last wrote. She has adjusted really well to having a cast, showing off her tenacity by learning to skooch around our home despite it. She started off being able to move a few feet the first couple days, but by the weekend was going from one side of the apartment to the other.

Sally returned to MSK on Tuesday to begin the second month of her reduced chemo cycle. She also began five days of steroids, which lead not only to mood swings but we now know to her bones weakening. Despite the recent challenges, Dr. Steinherz recommended that we return to the more intensive chemo in January for the remaining eight months of treatment as initially planned. If Sally’s leg is not healed by then, he may push it back a few weeks to give it more time to heal, but no more than that. As he said, it’s a leg or life decision. Hearing it put so bluntly is hard to hear, but know it’s the scary truth about Sally’s battle. 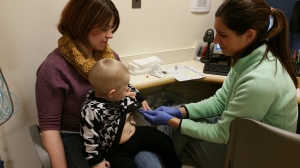 Getting labs drawn on Tuesday.

This morning, Sally was back at MSK to have X-Rays taken and to meet with the hospital’s orthopedist. Based on the X-Rays, the doctor anticipates that Sally’s cast can be taken off after four weeks of it going on, which puts us around December 22nd. This means that she should have it off just in time for Christmas, which makes us both happy. It will also make us nervous. The orthopedist said that the break was likely caused by Sally twisting and putting pressure on it in just a way that lead to the break. There’s nothing we could have done to prevent it, we’ll just have to be careful with her and if she shows any signs of being uncomfortable or tired we are to stop and let her rest immediately. 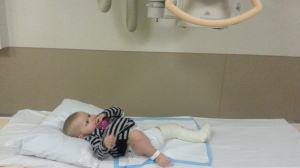 Checking out the X-Ray machine.

In addition, Sally will be fitted for a brace that she can wear on her leg to give it added support when the cast comes off. To help strengthen her bones she is now receiving Calcium and Vitamin D. Outside of that, there is little we can do to prevent future breaks other than keeping a close eye on her.

We’re in full Christmas mode at the Kabel home, the tree is up and decorated, Sally loves to pull the ornaments off the bottom. She also continues to be obsessed with our singing Santa doll, even figuring out how to turn it on so at times we hear it continuously. It makes her happy, so is of no annoyance to us. Somebody recently asked “How is Sally doing?” to which Nicole replied “Great, better than us.” We are both still very unsettled with all of these recent challenges. We’ve seen twice now recently how quickly things can change, and see more evidence of it with families we know both through MSK and online.

It’s a scary world to live in. On Thanksgiving we were excited to be home together, however William came down with a fever. At night it peaked at 104.6 which is much higher than our boys ever get. Panic sets in, Sally’s Leukemia presented itself in phantom fevers leading up to her diagnosis and we were set on bringing him into the ER. 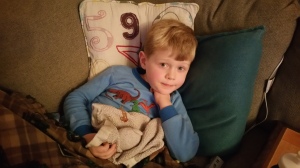 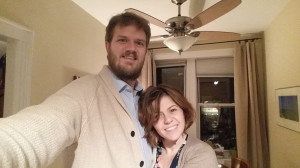 Nicole and I took this as we were switching places at Thanksgiving so we’d each get to eat with family.

Nicole reached out to Mama Adrienne (one of Sally’s nurses) who gave advice on how to cool William’s body and when we should bring him in if we can’t get his fever down. It calmed both of us and luckily it broke overnight and he was fine the next day. The situation shows how on edge we are, talking about it and knowing other parents living in a post-cancer world, that feeling will likely lessen in coming years but will be with us for the rest of our lives. That’s what having a child with cancer does to you, you’re never the same or at peace.

Still, our aim is to enjoy the Holidays. We were able to bring Sally to spend Thanksgiving with family, and the next night to a Christmas party with Nicole’s dad’s family who we rarely get to see. Sally was the “belle of the ball” at both, everybody very taken with her. It was nice to see and meet family that have been following her very closely online despite never meeting her before that night. The kind words, notes and messages of support we continue to receive mean the world to us. 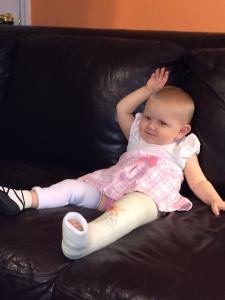 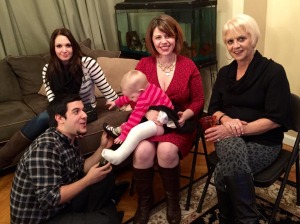 Hanging out at a family party. 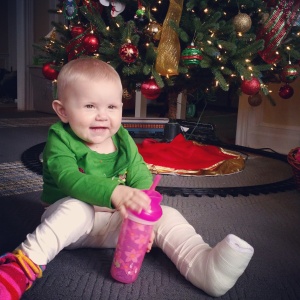 Please keep Sally in your thoughts and prayers, hopefully there won’t be much to report on before Christmas, other than good tidings and joy.