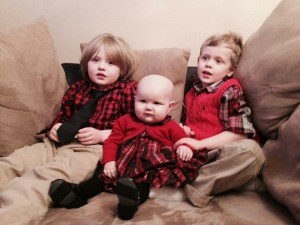 Hi all – We haven’t sent an update in a week, although we’ve tried to post photos to Sally’s Facebook page throughout that time. As hoped, Memorial Sloan-Kettering was able to arrange for us to start Sally’s three-day chemo treatment on Sunday which allowed us to celebrate Christmas at home.

Sunday was uneventful, Sally received treatment the entire day in MSK’s pediatric Urgent Care Unit, as the clinic was closed. This meant that the playroom and the floor were pretty much shut down, so it was only us, some nurses, our cleaning friend Karen, and a handful of patients there for urgent care. I snuck out with the boys for a bit to see the trains at Grand Central and watch the Bills game, which they enjoyed. 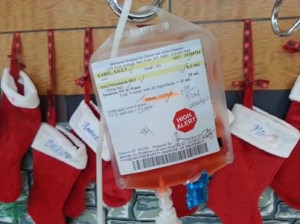 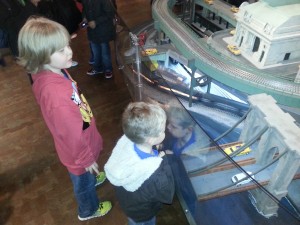 The boys checking out the model trains at Grand Central Terminal

On Monday, it was a bit more chaotic as the clinic was open and people were trying to get their appointments over with so they could be home Christmas Eve and Day. We got started late as Sally’s chemo wasn’t ready, but had fun singing Christmas carols with some of the other kids in the playroom while we waited. Once things got started, Nicole took William to the Natural History Museum to show him the dinosaurs while I hung out with Sally. Thomas stayed with Grandma Sally and helped her ready for the big Christmas Eve dinner she was hosting. Again, we remained at the hospital til around 6pm until Sally’s chemo was done then headed home, to return back yet again early on Tuesday.

Christmas Eve was much quieter at the hospital, Thomas was still with Grandma so Nicole, William and I headed in with Sally. We brought with us a cart filled with gifts and cookies (thanks Teri!) that Nicole and William distributed to all of the staff who have been such a help to us. I wore my elf costume to keep things light, receiving a lot of smiles and laughs, although one little boy scowled at me which was funny. The smile that one little girl gave me while she laid on her father in obvious discomfort made it all worth it. Sally’s treatment was a bit shorter so were able to leave around 3pm. 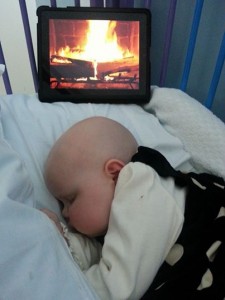 Sally napping by the fire. As Nicole said – “sleeping all snug in her bed, while visions of sugar plums dance in her head.” 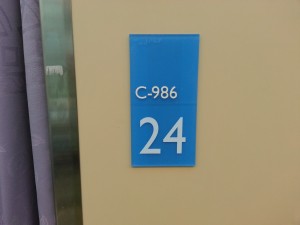 We actually had room 24 on December 24th.

Finishing up chemo on day 3.

We managed to go to Nicole’s mother’s for a bit after. She was hosting the big seven courses of fish dinner for 25 people, Nicole and I had hosted the last two years but obviously would have been too much this year. Sally stayed for about 15 minutes so the family could say hello to her, after which I headed home with her. After three days of chemo, a lot of back and forth of various family saying they might be sick, and our doctor telling us not to risk bringing her to the dinner I had a moment of panic and had to get her out of there. Nicole and the boys stayed for a couple hours and Sally and I hung out and had a quiet evening together.

All of the above was worth having Sally home for Christmas. We got up and opened presents, and good lord were there presents. We actually had to break it up into two rounds for the kids as there were so many. We had to keep reminding the boys not to get used to this, future Christmases will be like in the past with only a handful of presents. Thanks again to PS19 for adopting the family and bringing such joy to the kids! 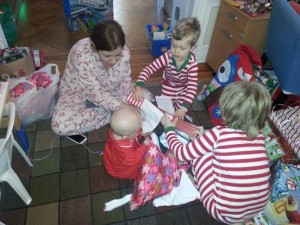 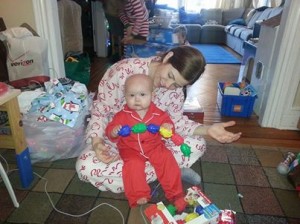 One of Sally’s favorite new toys.

We decided to go to Grandma Sally’s for dinner as there were a lot less people and this time a bit more prepared bringing face masks, they also aired out and cleaned the apartment before we arrived. Following that it was a typical Christmas dinner, which we’re happy to say was a good thing. 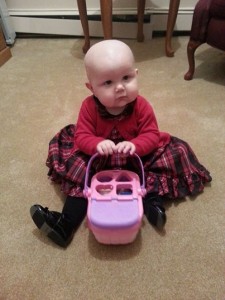 The rest of the week has been quiet, Sally has had visits from her PT and OT and we even managed to go visit friends in the neighborhood last night. She and William both have colds, so have been keeping an eye on her. On Sunday, her ANC was 1.2, which means her immune system was low to start. All that chemo she got early in the week is expected to knock her counts down over the next few days. As a result, we’re constantly checking her head for a fever, and wouldn’t be surprised to have to make an unplanned hospital trip in the coming days.

I went to buy new eyeglasses yesterday, and went into a small shop down the street. The folks helping me looked familiar and after chatting, turns out that the woman’s brother had been the honoree at the Frankie’s Mission pediatric fundraiser that Nicole and I attended a few weeks ago. He had been asked to speak as he had successfully undergone a bone marrow transplant at MSK after being diagnosed with Leukemia. Nicole and I had met his sister and the owner/doctor that night that I happened to now be buying my glasses from. Bay Ridge and the Memorial Sloan Kettering world yet again gets smaller as we go through this process. Although on a sad note, we also learned that a child at Thomas’ school passed away from pediatric cancer on Christmas Eve. We weren’t aware there was a child suffering from it at the school and feel awful for the family. We also have to discuss it with Thomas before he goes back, as we’re sure he’ll hear about it and know he’ll make associations with Sally.

All in all it was a great week for us Kabels, we managed to celebrate Christmas at home and Sally continues to develop and be in high spirits. However, we also know of two families we follow online who lost their children to cancer this week. Our emotions are always a roller coaster, but was especially true this week between the highs of Christmas and the lows of the reality of what we’re dealing with. Please keep Sally in your thoughts and prayers.