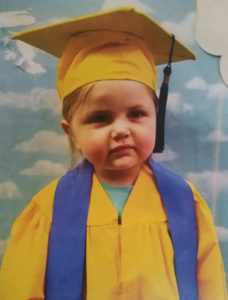 Hi all – Looking back at old posts we’ve always provided an update around this time of year as it coincides with the start of Sally’s cancer treatment and this journey we’re on, now FOUR YEARS in. We also realized it’s been almost five months since our last update, so am sure many are wondering how Sally is doing.

In short, we’ve had ups and downs and continue to take it one day at a time as Sally always needs to keep us guessing.

Today, Sally hit a big milestone as we celebrated her Moving Up ceremony finishing pre-school. She’s been taking dance class but we kept her out of the recent recital as we felt it’d be too much for her. Watching Thomas & William rehearse at their performances you could tell she wanted to be up on that stage, so today she finally got to go up there and shake her booty with her school friends. We weren’t sure how she’d handle it, but she went up there first and started waving to everybody and showed no signs of being nervous the entire time. In fact, she loved it. (As a side note, Daddy was too terrified to go up on stage for HIS pre-k ceremony 34 years ago) 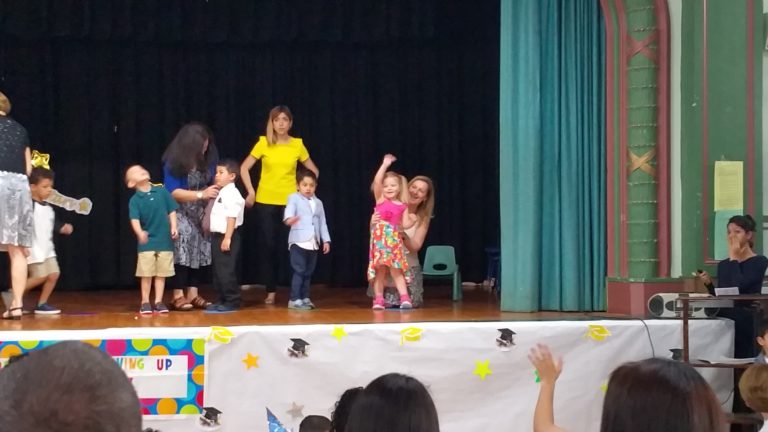 Sadly it did come at a price. Once she got off stage she came over to us and we could tell she was off. She was clearly incoherent and could barely stand, and started having seizure activity. We whisked her off to her air-conditioned classroom to get her out of the overstimulating atmosphere.

Sally with her Para, who took amazing care of her this year and was able to track her seizure activity for us. This was after the ceremony and you can clearly see Sally is out of it. 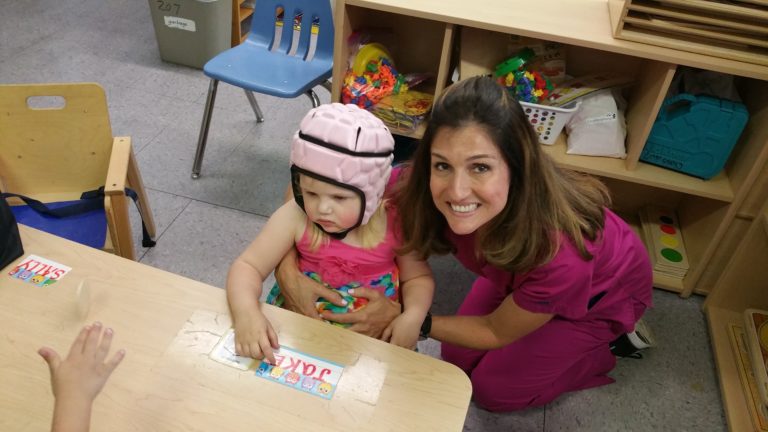 With the school nurse who has been a lifesaver with Sally’s meds and caring for her.

Seeing her up on stage brought out a lot of emotions in us, knowing there were times we didn’t know if she’d get to experience this achievement. In our last update we mentioned that we’d identified a special school for Sally next year and were working on the application. Unfortunately, shortly after that update Sally was hospitalized for ten days with pneumonia, and she missed five weeks of school. This delayed an evaluation Sally required for the application (which we are just now finalizing) and we were put on a waiting list for our top school choice.

Over the last few weeks our school district admitted that they don’t have a school that can accommodate Sally’s special needs. In addition, her current school has been undergoing significant staff changes, so leaving her back may not be an option. As a result, we’re urgently searching for a viable school option that can meet Sally’s unique needs for September.

At the same time, Sally’s refractory epilepsy has kept us on our toes. First of all, we determined that Sally suffers from sleep apnea. Cuz…you know…she needs another ailment. After several weeks of urgent follow-ups we secured a CPAP machine that Sally now sleeps with at night. Secondly, we continued on with the ketogenic diet that we had started just before the last update. We believe it has improved her cognitive ability, however hasn’t had the hoped-for effect of stopping her seizures. 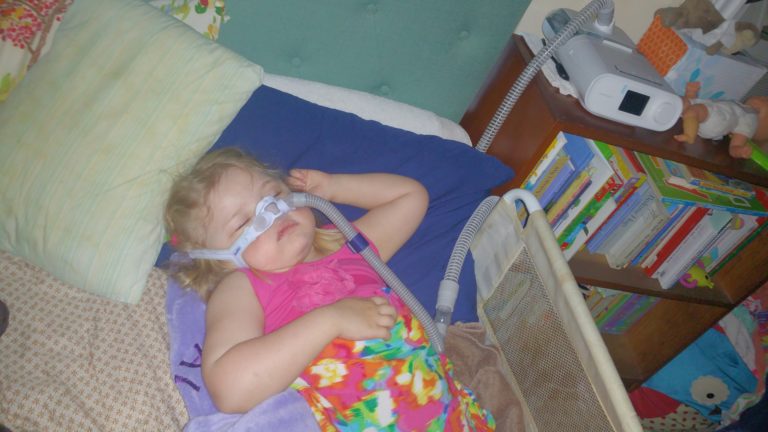 Sally sleeping with her CPAP.

After seeing Sally’s seizures drop from 50/day to very few daily, we saw them rise back up to concerning levels this spring despite the CPAP and diet. A recent blood test showed that her seizure med levels (Onfi/Depakote) were too low. The ketogenic diet has caused her to gain weight, so her epilepsy team decided to increase her levels over the last few weeks. We’ve seen some improvement, however over the last week Sally has been exhausted, not eating and incoherent/unstable at times. After speaking with the team yesterday, we decided that she may be over medicated and are lowering her doses to see if there is improvement, without increasing her seizures. It will take a few weeks to see where all of these changes net out.

Never a dull moment in the Kabel Homestead.

Just like with her cancer treatment, every time we get things stabilized Sally throws us another curve ball. This makes planning for Sally very challenging as she can fluctuate between good periods where she has few seizures and lots of energy, and then rough periods (like now) with increased activity and is not herself from the change in medications. Making sure Sally is in the right school and class next year is of utmost importance and…well…stressful and overwhelming as we need to keep her on an upward trajectory.

As we continue to work out school and her medications, we’re excited to have the cabana again this year. Sally has been begging us to go to the beach and pool all winter. Her first time in the pool she swam the entire length on her own (wearing a swimmie) as if she never left. Although it also exhausted her for two days.

She asked to wear goggles and loves them!

She settled right back into her routine of playing in the sand and at the water table. In some ways its comforting to see her back in her happy place of the last two summers, and how far she’s come since that first summer in 2015 when she was still getting chemo and unable to walk. In other ways it’s sad to see how the other kids her age (and even younger) have advanced so much more in that time than our little girl, and how she relates better to toddlers than a fellow 4-year-old. As we’ve said, we know where Sally’s LGS-like epilepsy can lead, which is why we’re determined to get her meds right, her seizures under control and our little girl in the right school for her needs.

This school year has been wonderful for her development. She’s had an opportunity to make friends and be in a typical setting for her age after being in isolation for most of her life. She’s still a bossy boiler, but is learning to ask questions and relate to others. The other day when she was leaving school early, all the boys came over and gave her hugs and told her good-bye and they’d miss her. (Always the boys, which gives Daddy heart-attacks  that Mommy takes joy in) 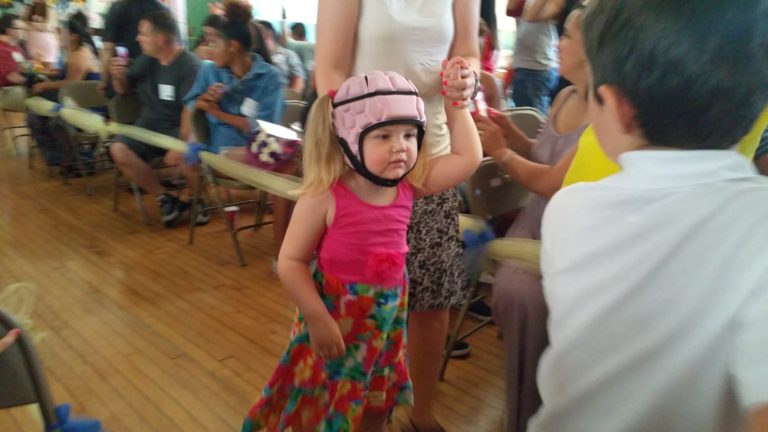 These are the milestones we focus on, they warm our hearts and what we aim to (and WILL) build on. 🙂