Hi all – It’s been almost two months since our last update, which is back when Sally had her port surgically removed. We’ve been very busy during that stretch which included a trip to Florida to see Grampa and Gramma Kabel, capped off by a visit to Disney World. It was our first real family vacation, and a much needed break from our chaotic lives over the last two and a half years. 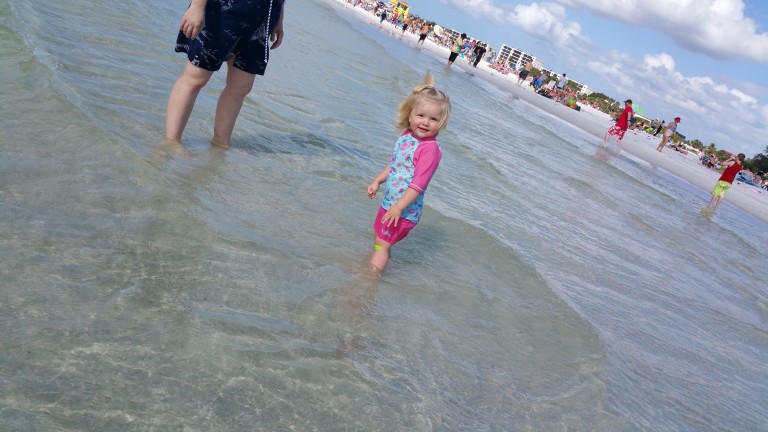 As we were coming off It’s a Small World at Disney World, we bumped into the head of Sally’s Leukemia Team, Dr. Steinherz! Totally random!

Sally has been doing very well, continuing to progress in her development since finishing chemo in August. She loves to go down slides and ride the swings at the playground, and she prefers to walk places instead of riding in the stroller. It’s hard to believe she was still receiving chemo only five months ago. Sometimes we forget that she’s only been walking without support for that long too. 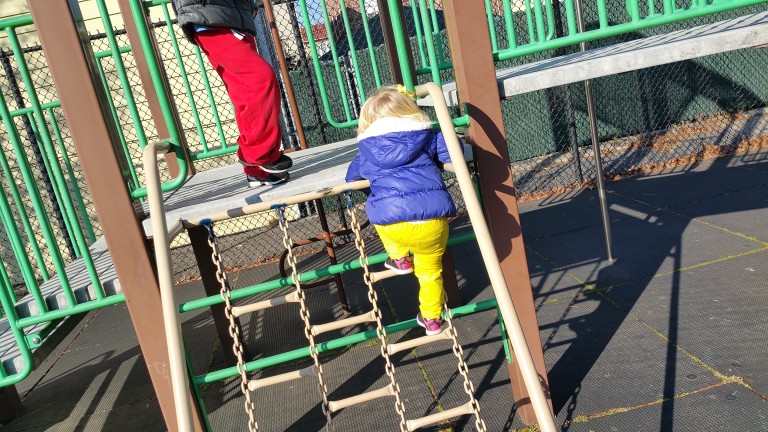 Climbing the chains at the playground for the first time.

Many have asked if we’re back to normal as a family. The brief answer to that is no. Even though Sally has been off treatment, we are still working to get back to some semblance of ‘normalcy’.  Nicole often gets asked  if she’s back to working full time since she doesn’t have to bring Sally to MSK anymore other than her monthly appointments. In reality, Nicole is just as busy post-treatment with Sally.

Due to the toxic treatment, Sally’s development was put way behind schedule as we’ve shared extensively throughout our journey. There are many things she’s not able to do that most kids her age can. She can’t run yet, only walk quickly. She can’t go up stairs on her right leg, and gets tired after one flight on her left. She can’t jump. Can’t get on a riding toy on her own yet, nor ride a bike or scooter. When provided a pen and paper she grows tired after a couple scribbles. She doesn’t recognize colors other than blue (thanks Thomas the Train). In other words, she has a ways to go to overcome the effects of treatment. In order to catch her up, she’s receiving an aggressive amount of therapy here in our home which includes the following on a weekly basis:

It took a few weeks to find therapists and create a schedule that incorporated Sally still getting a few naps a week and also worked with Thomas and William’s activities. Sally now has a great team of therapists in place, although gets a little hectic sometimes because of cancellations and rescheduling. We also take her to MSKCC once a month to check in with her therapy team there. 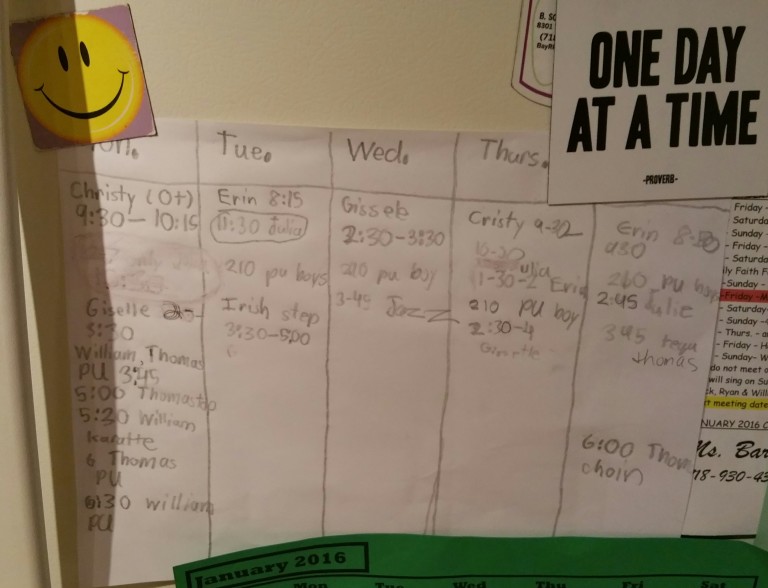 Our ever evolving schedule…

In addition, we are working extremely hard to get Sally eating again. If you recall, Sally stopped eating shortly after her treatment started at 10 months of age (she had only just started eating baby food three weeks earlier), and did not eat anything by mouth for almost two years during an important period for developing eating skills. Sally did maintain some level of breast feeding which was very helpful. While nursing, Nicole often simultaneously tube fed her as a way to associate nursing with a way to satiate her hunger.  All food and medication were delivered via a feeding tube into her stomach. During treatment, her oral muscles did not strengthen as with typical children. She lost the reflex to chew on her back teeth, to alternate food from one side of the mouth to the other and Sally never learned that eating food overcomes hunger. Now that treatment is over, we are trying to teach her body to eat which is a slow and arduous process, especially with the stubbornness of a “threenager”. After 39 months of expressing milk Nicole decided  to move on and focus on table feeding in November.

This has been very stressful, every meal is a battle with Sally in getting her to eat and teaching her that eating makes her feel better. Most meals consist of us sitting with her at the table for an hour in which she slowly eats an egg, or three organic chicken nuggets, or some broccoli and strawberries. It requires a ton of patience, and even some bribing (“Sally, if you take a bite I’ll wear this plate as a hat!”). We made some progress early on getting her to swallow, and have found some foods she likes. But for the last few weeks we’ve hit a plateau, where she’s not eating any more or doing it with any less urging from us. Her feeding therapists expect these types of delays and reactions given her age and all she’s been through. At the moment she is half fed through her tube and half table fed. Considering where she was a few months ago she has made good progress. 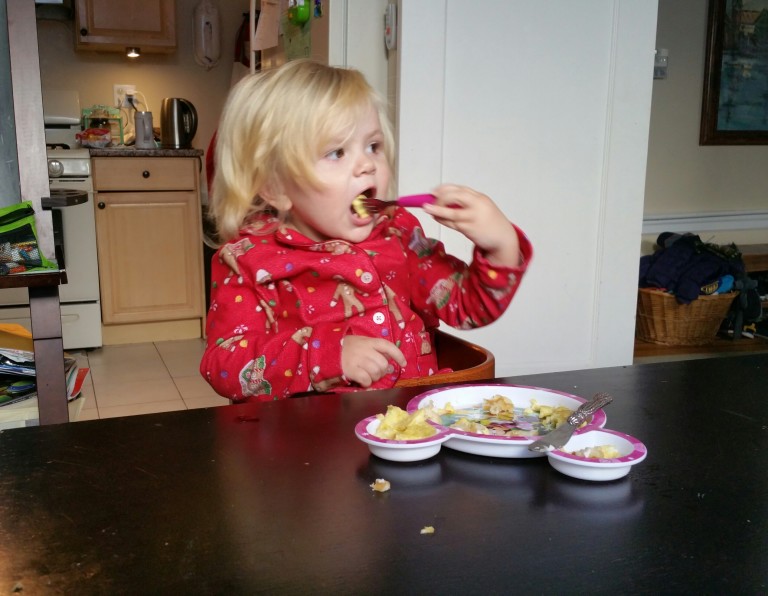 Eating her egg over the course of an hour. It certainly is teaching us patience, and in a good way forcing our family to sit together for meals as we don’t get up until Sally is done.

Some have suggested we should just remove her feeding tube and force her to eat. There’s a couple problems with that which include the fact that she still needs to understand that eating food will satiate her. Until she makes that connection, she’s not going to eat enough to nourish herself.  Sally also needs to be able to chew efficiently and have the strength to do so for three meals a day. She’s at a decent weight right now, if anybody remembers Sally’s weight was low at times over treatment due to all of the vomiting and extreme diarrhea. At our last checkup we received a printout and realized she was below the 0% percentile for height and weight in her age group during treatment! On the bight side, she has now reached 20th% for height and 75th% for weight. We are so grateful she is growing, gaining weight and reaching new milestones every day. If we remove the tube before she’s ready we risk her weight significantly dropping, god forbid she’s underweight and relapses and we have to start treatment again at a low weight. Not to mention Sally still takes several medications that we wouldn’t be able to deliver orally. So removing the tube is not happening until she’s able to nourish herself by mouth. 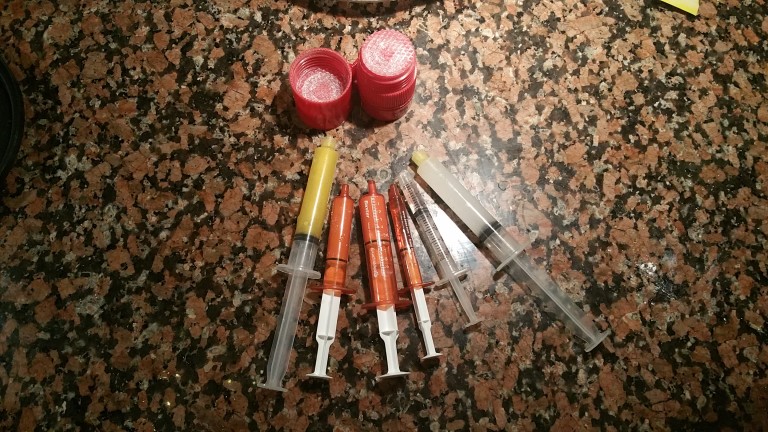 She gets these meds and vitamins every single morning.

So although Sally progresses in some areas, she’s still challenged in others and is not ready to be away from us for long periods yet. Trust us, nobody will be happier than our family when she gets to that point, but is going to take time. We are still coming out of our own shells as a family. We were driving into Manhattan recently to spend a fun family day together when Thomas remarked that he was feeling sad. When we asked why, he replied that we were on the highway towards Sloan Kettering and he was thinking about all the trips we made there and what Sally went through. The boys grow worried when Sally shows any sign of not feeling well. Secretly, so do we. 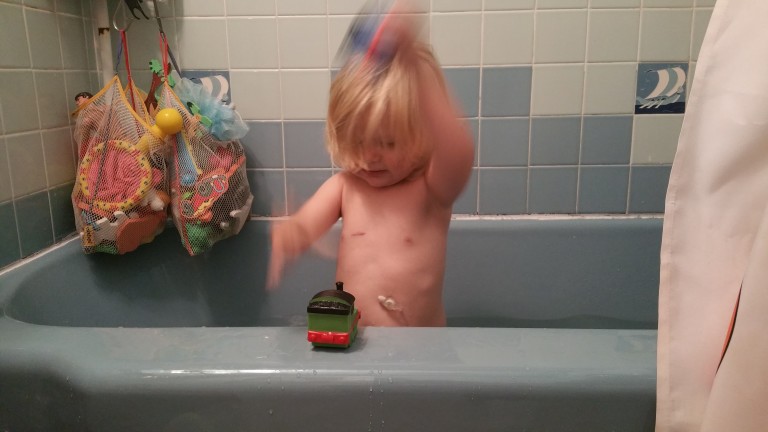 The lingering marks are daily reminders of what Sally (and we) endured.

Nicole and I sat and talked about our feelings on New Year’s Eve, about how we hoped 2016 would be the first full year for Sally without chemo. We both acknowledged our anxiety over Sally’s potential for relapse, thinking back to our decision a year ago this time to scale back her treatment after the seizures, extreme GI issues and broken bones. It made a world of difference for her considering her body had taken all it could, and we’d never second guess that decision, but you hope it doesn’t one day come back to haunt us. What’s very frustrating is that we constantly have to educate and battle to get Sally the support she needs, whether it’s NYC’s Board of Education, William and Thomas’ doctors, or sometimes even Sloan Kettering itself.  We continue to watch kids we know relapse, and some pass away. It doesn’t get any easier. We do our best to look forward, be positive and move on with our lives, but deep down we’re still unsettled and scared. We can honestly say that we treat every day with Sally as a gift, and don’t take even one for granted.

Here’s to 2016 being a good one for Sally and our family, and for all the cancer families out there. Please keep Sally in your thoughts and prayers.