Emerging From Our Cave

Hi all – We realize it’s been about 6 weeks since our last update. To be honest, there really hasn’t been anything major to update, which is actually a very good thing. Last week we kicked off Cycle 11 with Sally receiving a spinal tap of Cytarabine chemo and a bone marrow aspirate to check her marrow. Unfortunately her counts were low from the double dose of Cytarabine that she received to close out Cycle 10 two weeks ago, so treatment is on hold, likely until this week.

Ever since the “break” where she went on reduced chemo for two months, Sally has been doing really well. We have some tough periods here and there including stretches of days where she vomits or has diarrhea, fevers, or just doesn’t feel well. We mostly share happy stories online or socially, but those rough patches are still very much there, although not nearly as often as we experienced prior to the seizures. 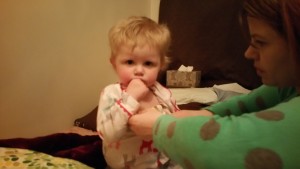 Getting changed after waking up and throwing up, this was during a several day stretch of vomiting.

Despite returning to intensive chemo, Sally continues to surprise us by making strides. Her vocabulary has really taken off, she’s extremely verbal. Statements like “want this”, “go outside”, “go night night”, “give me water” have become increasingly regular and has better helped Nicole and I understand her needs and wants. Sometimes we’re amazed at words she strings together to communicate what she’s thinking, she really is paying attention to people around her in what they say and do. She even tells us “god bless you” after we sneeze. She also sings. She’ll be playing at her dollhouse and all of a sudden break into “Twinkle Twinkle Little Star”. 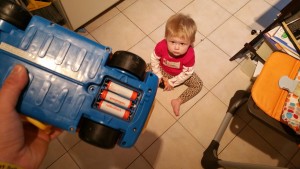 We found out that that Sally grew just over an inch the last 3 months, so is continuing to grow despite the harsher chemo. She’s also been working hard towards walking. Prior to the leg breaks, she was on the verge of taking her first steps. She’s not at that point just yet, but is getting close. She can pull herself up using low furniture, and loves to push her baby stroller and shopping cart both at home and in therapy.  She’s lighting quick skooching on her tushy, especially if it’s to go take her weekly bath (which she loves) or to go outside. 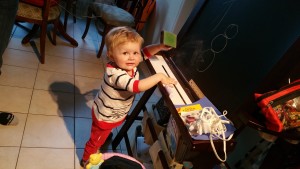 Standing at the chalkboard, we think pretending to be a teacher. 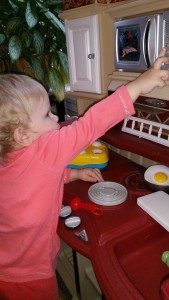 That extra inch she grew lets her reach the microwave in her kitchen.

Speaking of outside, “go outside” is Sally’s favorite thing to do. She demands it first thing upon waking. Actually, first she demands to “watch ABC” alphabet videos on YouTube that she has become obsessed with, which don’t bother us much as they’re educational and help with her vocabulary. But after she gets that, she’s ready to go outside. Whether it’s to go with me to drop the boys off at school and smile/wave to people on the way, to push our neighbor’s little scooter on the sidewalk, to pick up her meds at Bridge Pharmacy, or even taking the car into the hospital. Last week, we managed to eat out at a restaurant together as a family for the first time in 6 months! Outside at a secluded table after disinfecting every surface within reach of course. 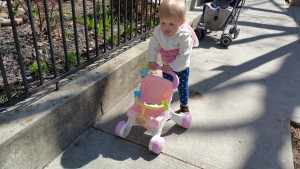 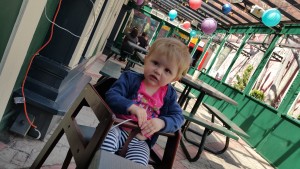 A bit confused about this whole ‘eating outside’ thing. 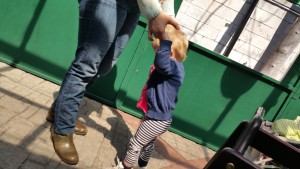 After spending time in the high chair, she asked Mommy to take her for a walk, smiling at other diners.

The warmer weather has been a blessing for us, Nicole and I were really emotionally struggling as winter dragged on. Between being forced inside without the ability to do simple things like go visit friends or even have them visit us, to not being able to escape and do normal things like go to the playground or go out to a restaurant to eat, we have been starved to come out of our “cave”, physically and mentally. Add to that the emotional toll of losing many kids we knew this winter and it all started to feel suffocating, we were both depressed.

We tried to pour ourselves into work and aiding the childhood cancer cause as a distraction. Nicole was to head to Albany with other cancer moms to help secure funding from the state, but decided to put the effort on hold to better plan for what is required to work with our state government. Although, she did appear in a Fox 5 piece on childhood cancer research – Click here to view.

Our family was invited to ride on the first ever Childhood Cancer Go Gold float in our neighborhood’s St. Patrick’s Day Parade, which Sally loved dancing to the marching bands. 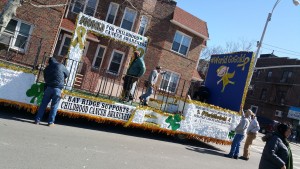 The float was incredible! So many people recognized Sally and waved to her.

We also worked to help a fellow cancer mom at MSK who was moved into a shelter with her two daughters to raise money towards rent. We set up a website for her with info and a link to donate, click here if you care to learn more.

Finally I was overwhelmed with the responses I received from my Cancer Dads – The Forgotten Parent post. It was by far the most shared and viewed post we’e ever written here. Apparently I put into words what for years cancer dads have felt about their role in their child’s battle. I also realized that there was no support system for dads like those that exist for moms, so started a Childhood Cancer Dads Support Group on Facebook. The group is private, for cancer dads only and I vet every dad who comes in. Most importantly, it was badly needed. One dad who found us finally had other men he could relate and talk to after losing his child ten years ago. This was before social media when you didn’t speak much with other parents, he had feelings bottled up for a decade with no outlet to share them until now.

Being able to help other families allows us to focus on something we can control, in a time when we feel so helpless against cancer. Sally has been doing so much better since the “break”, her development despite her challenges has been nothing short of amazing. She even still has a full head of blonde hair, which was expected to fall out and still could, but when the tubes in her body aren’t visible and she’s standing at a table she passes for a normal healthy toddler. With roughly five more months of chemo to go, we’re in the final quarter of treatment. It’s so close, yet so far away with five months being an eternity when dealing with childhood cancer. We also know that relapses are common towards the end of treatment.

With that reality in mind, we’ll continue to take it a day at a time, but at the same time we will have to begin preparing for life after treatment in the coming months. In a strange way this is both welcome, and scary for us.