Hi all – As you probably surmised from the title, Sally finally got her cast off this morning after having it on for 6 1/2 weeks. An X-ray showed that all 3 of her fractures have been healing nicely. Since the breaks have all occurred from simply standing on her leg, we’re obviously going to take getting her back on her feet very slow. Although Sally has already been pulling herself to a standing position and you can tell she really just wants to “GO”. In fact, she just used my shoulder to pull up to a standing position while typing this. TROUBLE! 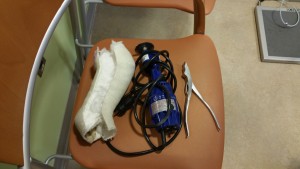 The tools used to get the cast off. 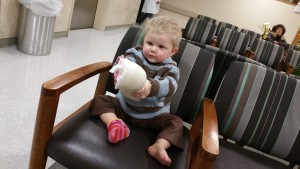 Showing us her cast. Of course we forgot to bring her a sock for her left foot. We’re out of practice.

Her bones have been weakened by the steroids, which we’ve been asking our Leukemia Team to let us continue them due to being such great Leukemia fighters. However, our doctors gave us their final answer last week – no more steroids. They feel she has already had more steroids than any other treatment plan out there and the risk of further damage to her leg outweighs any reward. When we told them we cared more about life over limb, they replied that they wanted Sally to have both. There wasn’t much left for us to argue so gave in.

Our last update we left off that Sally had just gotten hit with her first double dose of cytarabine chemo which we were told she’d have a rough time with. The rough time never came, she handled it quite well. It could be that the toxicity she’ll get with multiple treatments hasn’t caught up to her yet, or that we’ve gotten much better at managing her nausea, or that her body reacts better than most. That could obviously change over the final 7 months but is an encouraging sign. We’re waiting for her hair to fall out, which doctors say will happen. Maybe it won’t, but every day her hair grows and I grow more attached the harder it’ll be if and when it does. 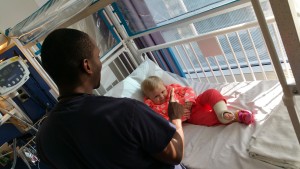 We got to see Nurse Greg, one of Sally’s favorite who we only see on weekends. We were there to get blood drawn and the two had a grand old time playing. 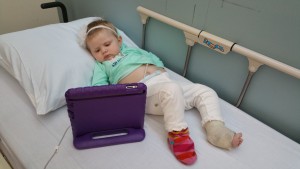 Relaxing, waiting for chemo. Sally watches an ABC video and is learning more words and the alphabet.

Sally also handled the 6MP chemo well that we gave her at home last week. She received it during her “break” but this was a much larger dose, replacing the Thioguanine chemo that her body just couldn’t handle anymore. Two weeks into the 2nd cycle of her return to intense chemo, Sally is really managing well and we can only hope it continues. 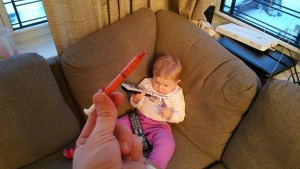 Giving her the 6MP chemo.

Many families we know in the cancer community have not been managing as well this month. Sally lost her friend and playmate Kylie after a long battle with Neuroblastoma two weeks ago which hit us hard. Two young women we hadn’t met personally but knew through friends, Amanda in Rochester and Kylie in Atlanta, both passed away. Kylie and her family were supposed to fly to NYC last weekend to attend a Broadway Show and we had hoped to meet them, however her cancer progressed faster than expected and she passed before being able to make the trip. Another reminder of how fast things can turn with childhood cancer.

We saw our friend Padraig and his mom last week who came in from Rochester for a Neuroblastoma treatment you can only get at MSK. The treatment is said to be so painful that it feels like all the nerves in your body are on fire, and the kids are treated in a secluded area of the clinic due to their painful screams. It was hard to see him and the family knowing what they were about to go through, which sadly ended up meeting those expectations.  Our friend Alex who is battling Leukemia in her teens suffered a stroke this week, likely caused by the same treatment Sally gets. She was paralyzed on the left side, but miraculously began to regain movement yesterday. I saw her this morning and she looked great, a major relief.

Finally our little buddy Erik, who is battling the exact same Infant Leukemia as Sally and just underwent a bone marrow transplant at MSK, is in critical condition across the street at NYPH Cornell Hospital. He is fighting to hang on and we are hoping his body can begin to heal itself. We visit him every time we have to head into MSK and tell him he needs to get better so Sally can have more of his legendary kisses. 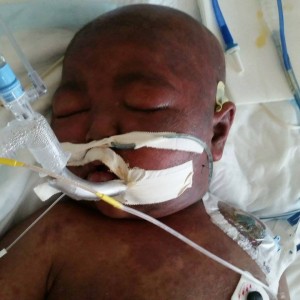 Please keep Erik in your thoughts and prayers. We need to see those big brown eyes again.

Seeing kids we know go through this takes a toll on Nicole and I emotionally. Combine that with the usual stress of raising a child with cancer and being cooped up inside this winter and as you can imagine, we’ve been a bit depressed and emotionally sensitive the last few weeks. We do our best to stay positive, especially for Thomas and William and for me at work, but it’s difficult to turn it off and can be a struggle at times. We say that it’s like we’re at war and we’re dealing with the post traumatic stress disorder. 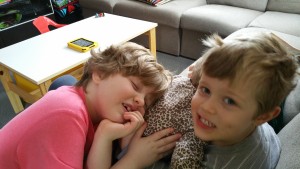 The boys snuggling their sister. Yes she’s in there.

We’re very much looking forward to spring so we can get out more and be able to visit friends again. Nicole has thrown herself into working with our friends at Frankie’s Misson and the Olivia Boccuzzi Foundation to secure funds from Albany for childhood cancer. They’re heading up there on Tuesday to meet with state political leaders. I’ve had to sit this one out, it has grown harder to focus on work the last six months after everything we’ve been through and I owe it to my workplace to give them the level of work they deserve. I’ve learned that there just isn’t room for anything beyond family and work for me right now and even Nicole is at her max with what she can handle with the Albany push. Hopefully after we get Sally through this we can work harder to get the attention and funding that these kids deserve. These things we see firsthand…it’s not ok.